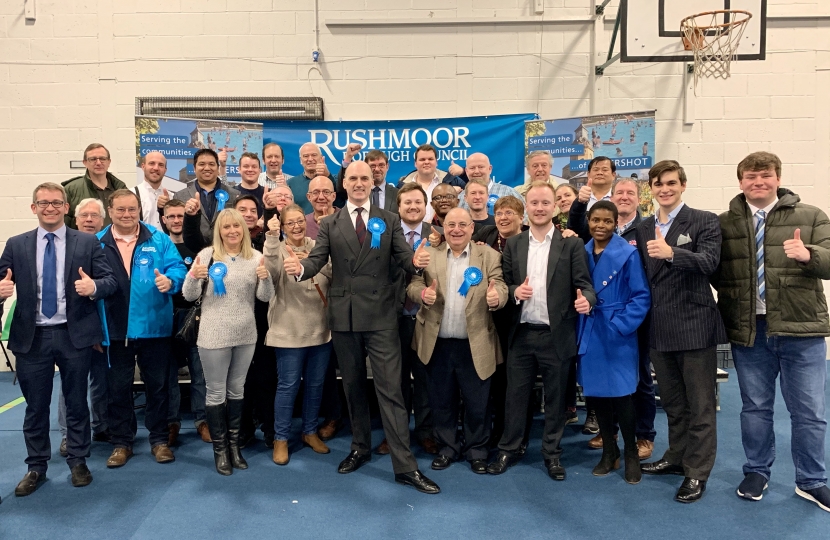 Conservative Leo Docherty has been returned for the second time as Member of Parliament for Aldershot, Farnborough, Blackwater and Hawley.

The result of the poll on 12th December, announced at The Sixth Form College Farnborough, saw Mr. Docherty elected with 27,980 votes – a 58.4% share. He increased his majority by over 5,000 to 16,698, the highest majority share in the Aldershot Constituency since 1979.

In the wake of the result, Mr. Docherty said: “I’m honoured and humbled to have been returned to the House of Commons, with an increased majority, to represent the people of Aldershot, Farnborough, Blackwater and Hawley as their Member of Parliament. Thank you to local residents for their continued support.

In this election, millions of people – many of whom had never voted Conservative before - put their faith in this People’s Government to deliver on the people’s priorities. And there’s no time to waste.

We have begun this Parliament with the most radical Queen’s Speech in a generation – one that will take us out of the EU, overhaul our immigration system, and will enshrine in law record investment for the NHS. It will take our country forward with an ambitious One Nation programme to unite and spread opportunity to every corner of our United Kingdom.

I very much look forward to getting back to work for the people of Aldershot, Farnborough, Blackwater and Hawley.”

Leo Docherty MP and his staff are contactable by phone (01252 377567), email (leo.docherty.mp@parliament.uk) and in person at his constituency office at 147 Victoria Road, Aldershot GU11 1JW.