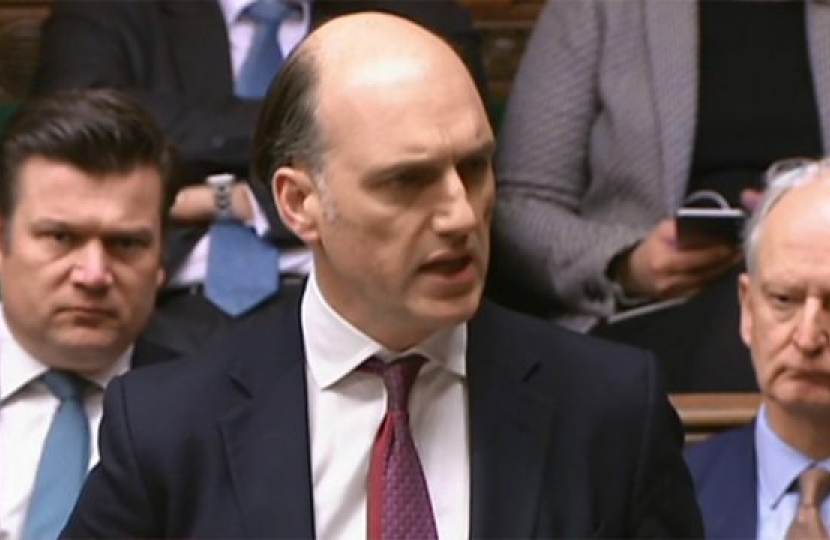 Leo Docherty, newly elected Member of Parliament for Aldershot, Farnborough and Blackwater, today made his maiden speech in the House of Commons.

You can watch his full speech, here.

"It is a great pleasure to follow Stephen Lloyd, and I warmly congratulate my hon. Friend John Lamont on his very fine maiden speech.

When Her Majesty Queen Victoria granted permission to her military command in 1854 to establish a permanent training camp for the British Army at the village of Aldershot, the foundation was laid not just for a successful garrison, but for a remarkable tradition of service to this country. Since that time, my constituency of Aldershot has been the home of the British Army and, since its foundation more than 160 years ago, thousands of servicemen and women have passed through the garrison while doing their loyal duty to the Crown. Today the garrison is still home to thousands of soldiers and their families: the 1st Battalion Grenadier Guards, the Queen’s Own Gurkha Logistic Regiment, 4 Rifles and my own regiment, the 1st Battalion Scots Guards. These regiments, as part of 12th Armoured Infantry Brigade, form one of the country’s most deployable and experienced combat units, with distinguished service in Iraq and Afghanistan.

For many years, Aldershot was home to the Parachute Regiment and British airborne forces. It was from Aldershot in 1982 that the airborne battalions of 2 and 3 Para joined the British taskforce sailing to the south Atlantic to liberate the Falkland Islands from the Argentine invasion. Last Sunday, to mark the 35th anniversary of their victory, our town was honoured to welcome back the surviving veterans of 2 and 3 Para, and the families of the fallen. They were joined by a new generation of serving soldiers and many local people from across our community in a demonstration of the high regard that Aldershot has for the armed forces community and the strong civic bond that exists between the military, the town and the wider borough of Rushmoor. Indeed, the borough has taken creative measures to support our veterans—for example, enabling a £10 million investment from Stoll to provide social housing for vulnerable veterans and help to reduce the alarmingly high levels of homelessness among that group of people.

Another group whose history is intertwined with that of Aldershot and the surrounding area is that of former Gurkha soldiers and their families. Their historic loyalty to our monarch and their immaculate record of courageous service is second to none, and they play a much valued and respected role in our community today. The Nepalese community is particularly active when it comes to charitable fundraising, and many other groups across the borough do exactly the same thing. Our football club, Aldershot Town, is more than just a club. It is a community hub that raises tens of thousands of pounds every year for good causes—as too, do the Rotarians, who are justifiably proud of the annual Rotary club donkey derby in Farnborough, which I recommend to all hon. Members.

Although my constituency is the home of the British Army, it is also the birthplace of British aviation. When Samuel Cody made the first British flight on the heath at Farnborough in 1908, it was the start of a remarkable story of courageous and determined innovation that has now blossomed into a huge global industry. Today, companies such as BAE Systems, TAG Farnborough, QinetiQ and a plethora of highly innovative defence aviation and hi-tech companies in Farnborough and the Blackwater valley employ thousands and earn millions for our Exchequer.

I did not start my life with a particular interest in politics. I started my career as a soldier and I am humbled to come to this place as a parliamentarian. I know that in my predecessor, Sir Gerald Howarth, I have very large shoes to fill. Sir Gerald is a man of absolute integrity who has dedicated his life to public service, and I have been hugely fortunate to benefit from his kindness and his wise counsel.

The strength of the military presence in my constituency is mirrored by the strength of civic society across Rushmoor borough, and I am proud of that. I am proud that we have a great history and a great future. We are diverse and dynamic. I am proud that we now have the youngest ever mayor of the Borough, Councillor Sophia Choudhary, who also happens to be a young Muslim woman of Kashmiri heritage. I hope to serve my constituents with the same sense of public service, energy and compassion that they themselves display every day of the week across Aldershot, Farnborough, Blackwater and Hawley.

Anyone familiar with my constituency will know that one figure who literally towers over us is the Duke of Wellington. The Iron Duke sits on horseback in massive bronze relief on top of Round Hill. The Iron Duke, never one to be over-patient with politicians, would, I think, have agreed with this nation’s other greatest soldier-turned-statesman, Sir Winston Churchill, who, as a young cavalry officer, lived in Aldershot cavalry barracks before deploying to India. Churchill famously said:

On that note, Mr Speaker, I will resume my place."