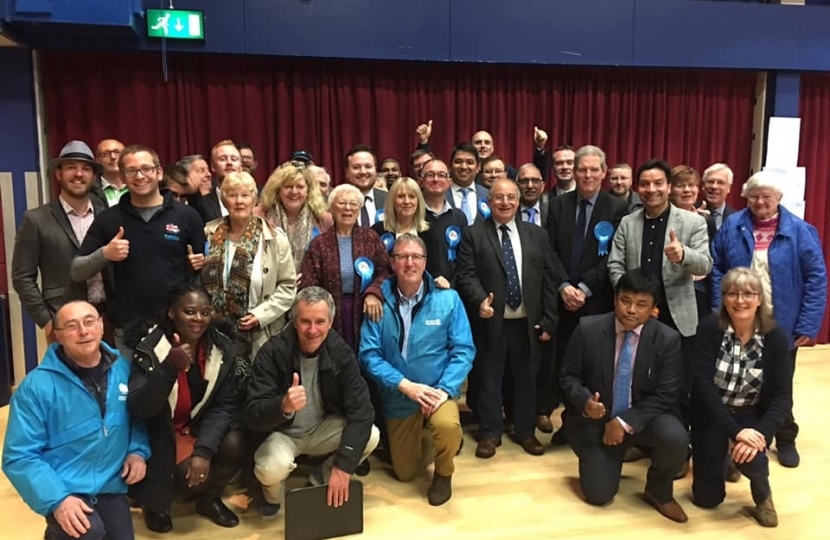 Rushmoor Borough Council remains comfortably under Conservative control after last night's local elections where, despite the sad defeat for Liz Corps in St Mark's ward, the Party gained two seats and held on to our remaining councillors across the Borough.

A special mention to newly-elected Cllr Prabesh KC, Rushmoor's first ever Nepali Councillor, for winning his seat off Labour after an incredibly energetic campaign in Wellington, Aldershot, and to Cllr Lee Jeffers for working hard to West Heath, Farnborough back from an Independent (formerly UKIP). Also, many congratulations to our other newly-elected councillors Cllr Peter Cullum in St John's, Farnborough and Cllr Calum Stewart in Knellwood, Farnborough.

Local MP Leo Docherty, said: "This is what teamwork looks like! After two gains Rushmoor Borough Council remains under Conservative control - with the fantastic leadership of Cllr David Clifford and his terrific team across Aldershot and Farnborough."

Thank you to our councillors, candidates, but most of all to the many volunteers who knocked doors, delivered leaflets, and stuffed envelopes throughout the campaign. This success is testament to your hard work, and we're incredibly grateful for all your efforts!

You can find the full elections results on the Rushmoor website, here.

If you'd like to find out more about how you can get involved in our campaigning locally, drop us an email at office@aldershotconservatives.com.